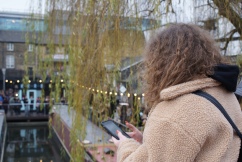 On the 13th and 14th January I was in London to see one of my favourite bands, The Hunna, play at O2 Brixton academy for the last night of their tour. After a lengthy train journey full of power naps we arrived in Brixton and went straight to our hotel room. We grabbed a quick and fatty dinner to line our stomachs before the gig and got ready back in our room. Of course we took too long to get ready and left a little later than planned, so you can imagine our disappointment when we saw that the line followed its way round half of the building.

With a quick pit stop at the toilet and the cloak room we rushed to get as close to the front as we could, finding ourselves somewhere between third and fourth row. The support acts, Night Riots and Coasts were great and they’re music complimented the vibe of The Hunna’s sound and the show perfectly.

The Hunna themselves were incredible, having never seen them live before I was beyond impressed. They are band that sound the same live as they do on their album, the set-list was perfect, full of most of my favourite songs such as; Never enough, Sycamore tree and She’s casual, I would definitely recommend giving them a listen.  The energy they had was amazing, especially as it was the last night of their tour. The whole night was insane, I left the gig with my ears ringing and my feet aching, exactly how it should be.

Sunday morning I woke up still exhausted and aching from the night before, who knew going to a gig would be so physically demanding? Joss and I got ready, again taking too long, and checked out late and made our way to Camden. I find Camden to be my favourite place in London, not that I have ventured to many other parts of the city, I love the atmosphere, the market and street food. If you can find it, I recommend the Chinese food stall that does mix-and-match for £5! Before having enough of the hustle and bustle of Camden, I made a quick stop at a piercing shop, decided to put myself through the pain of three ear piercings at once and then headed home to Worthing.

I can confidently say I have every intention of seeing The Hunna play again, if they are a band you like I am telling you: you have to go see them. This crazy weekend was the perfect end to my month back home for Christmas. I spent Sunday evening getting drunk with some of my favourite people as a goodbye, and I can’t wait to go back next week and do it all over again.